I recently discovered the Great British Bake Off. I binge watched the first season on Netflix in less than a week and have devoured all of the episodes available on Youtube.

I first got into baking with my good friend Mollie. She’s an expert baker and a little of her passion rubbed off on me, which led to baking the occasional cake for friends’ dinner or birthday parties. Watching the show amped up that passion to the nth degree and I came up with an idea: My plan is to bake every recipe released from the show, starting with the first season at http://british-bakers.com/the-great-british-bake-off-series-1-recipes/. I’m excited about trying it all out, including stuff that I could never fathom making like macaroons, souffles, and all kinds of bread, and learning from the successes and failures that come out of that process. Baking is definitely a way for me to create, relieve stress, and have a great time doing it.

I kicked it off by trying out Paul Hollywood’s cob recipe – a basic white bread loaf http://www.bbc.co.uk/food/recipes/paul_hollywoods_crusty_83536. The first time turned out okay, but it didn’t rise enough. Unfortunately I forgot to take a picture of it, but I’ve reattempted it a couple of times.

The second time turned out much better, but I forgot to make the slashes and put steam in the oven. 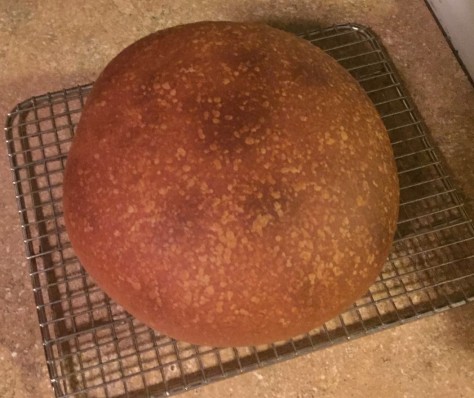 Third time was the charm a couple of days later. The loaf looked a lot more like a regular boule. The crust was crispy and it tasted amazing. I’m still having trouble with shaping the loaves though. Youtube videos make it look so easy but my loaves still tend to go both outward and upwards. Hopefully that will abate as I get more experienced working with bread dough. I could just start using a tin to shape the loaves, but I want to actually learn how to do it.

Since I had some pretty good success with this basic white bread boule, my plan is to try some other shapes and then start mixing up the different recipes, with some new fillings. So here it goes today with a basic bloomer or oval shape. My first shot at shaping it flopped as it oozed outward all over the plate. I knocked the dough back again and reshaped it twice. The final product isn’t bad, although I think that I should have let the dough rise a little bit longer. 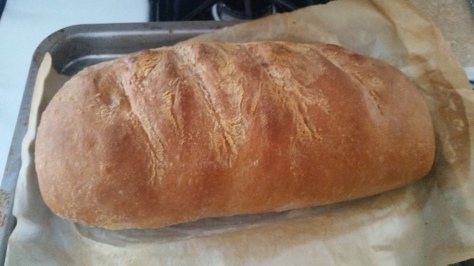 Any feedback or comments? I would love to hear them!

Learn more about me at my website www.pujaguha.com.
Sign up for my newsletter to learn about new releases, contests and more! http://bitly.com/1sIlG3h

Spy thriller AHRIMAN: THE SPIRIT OF DESTRUCTION (Book I of The Ahriman Legacy) is available as an ebook at and a paperback at Amazon.com. http://hyperurl.co/ahriman.

Family drama THE CONFLUENCE is available as an ebook at and a paperback at Amazon.com. http://bit.ly/ConfluenceIntl.